“You always want to leave an organization better than you found it. Roz’s tenure at the Foundation is a testament to this.”

After 12 years we bid farewell to Rosalyn Morrison who retires at the end of this year. 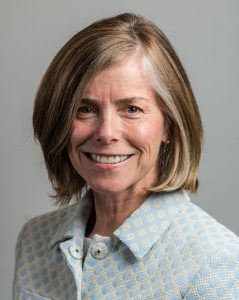 But it wasn’t all smooth sailing. Roz was a steady hand as she weathered a tumultuous first year – a year that saw the retirement of one CEO, Anne Swarbrick, the hiring of a new one, Rahul Bhardwaj, and plenty of staff turnover. Throughout this period of great change, Roz still managed to secure the success of several huge projects, including three Vital Grant Streams, the Toronto Sport Leadership Program, and the release of the Toronto’s Vital Signs report. But perhaps Roz’s most acclaimed achievement was Arts On Track, the Museum Subway station revamping and grand re-opening, which has now reached near-landmark status in Toronto.

“Rosalyn is the embodiment of what it means to be a city builder. Her ability to collaborate with and lead individuals from different sectors has dramatically increased what we have been able to accomplish at Toronto Foundation. I feel personally privileged to have learned from Rosalyn and believe that the foundation and the city are better because of her leadership. On behalf of Toronto Foundation’s Board of Directors, I express our profound thanks for all that you have done.”

Even in the last two years, Roz has shown no sign of slowing down. She was instrumental in building Toronto Foundation’s work in resilience by introducing the organization to the 100 Resilient Cities initiative. By resurfacing earlier Social Capital work and helping to raise $300,000, she sparked the launch of the Toronto Social Capital Study, and helped lay the groundwork for ongoing work on this important driver of the city’s wellbeing. She has even pushed to scale up Social Capital research throughout Ontario by working with the United Way of Greater Toronto, the Ontario Trillium Foundation and Community Foundations of Canada, among others.

Though her accomplishments are many, it is impossible to capture all of Roz’s incredible contributions in one short tribute. She has been a leader, an advisor, and a pillar of strength for Toronto Foundation. Though we are sad to see her go from our daily lives, we know she will remain a friend always. From all Toronto Foundation staff, board, and Fundholders, we thank Roz for all her important work and wish her all the luck in the world on her next adventure.