A Legacy with Roots
Close

A Legacy with Roots

Michael de Pencier plants trees for the past and the future

Trees are remarkable. They take in carbon and produce oxygen, helping us fight climate change. They absorb storm water and reduce flood damage. They can even keep our houses warmer in the winter and cooler in the summer.

Studies have shown that trees also contribute to our physical and mental well-being. And fundamentally, trees are beautiful. They represent strength, integrity and constancy. For many of us, they are a symbol of the values we stand for as Canadians.

Sadly, Torontonians haven’t been doing their best to steward the city’s trees. Fifty years ago, 40 per cent of the GTA was treed. Now, it’s closer to 27 per cent. And we’re poised to lose even more – roughly 8 per cent of Toronto’s trees are ash, which are steadily dying as a result of disease.

Self-described “green groupie” and long-time World Wildlife Fund board member, Michael de Pencier refuses to let Toronto’s tree canopy decline any further. Through the Michael and Honor de Pencier Fund, he has supported environmental organizations like Trees Ontario, the Atmospheric Fund, and Clean Air Partnership, among others. And for several years, Michael has also been lending his expertise and passion to the Trees For Life Urban Tree Coalition, an initiative spearheaded by Mark Cullen to double the city’s tree canopy.

Michael, Mark and their colleague Tony Di Giovanni, Landscape Ontario’s executive director, wanted to do more. Two years ago, they launched the Highway of Heroes Tree Campaign, an ambitious project to plant two million trees along the 401 Highway of Heroes. These trees would stand as a living tribute to the two million Canadians who have served in the military, including the 117,000 Canadians who have died in wars. They’ve focused particularly on planting hardy native species, like maples, that can thrive in the region’s landscape and have a deeper symbolic meaning. “We want the maple leaf to be prominent because we’re honouring those who have sacrificed for Canada,” says Michael. 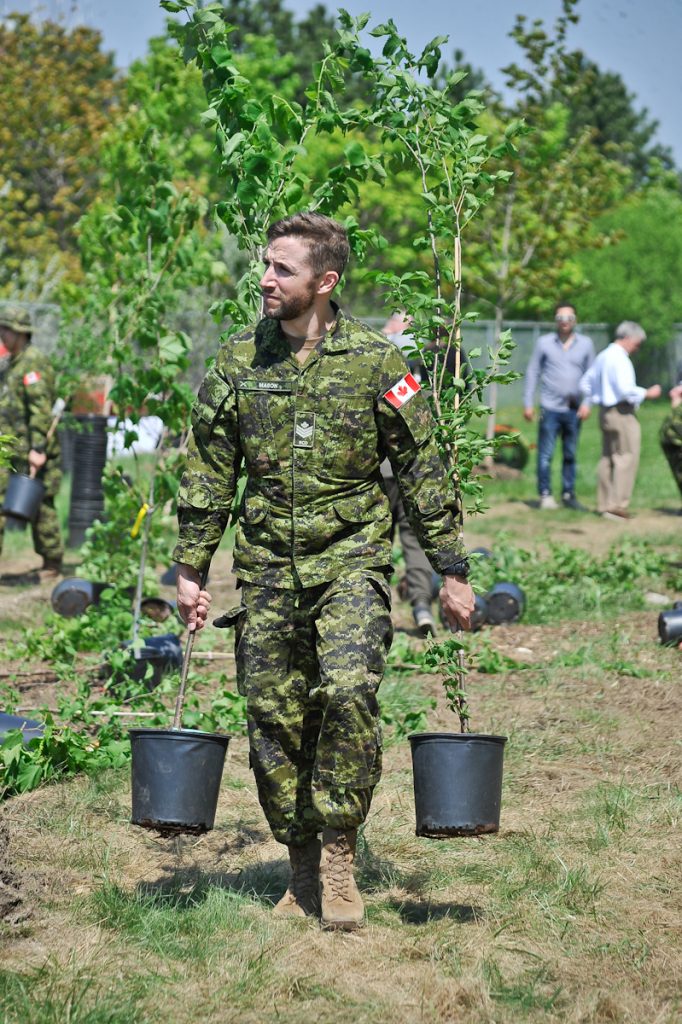 Their collective efforts are taking root. Around 10,000 trees have been planted in Toronto so far. Municipalities and organizations along the Highway of Heroes corridor are also pitching in. The Ganaraska Region Conservation Authority contributed 30,000 trees, and both the City of Toronto and the Ontario government have given funds.

But their greatest support has come from individual donors. Of course, Michael has given generously from his fund. They’ve even received a donation from a fellow Toronto Foundation community member through the GH Wood Legacy Fund. With everyone pitching in, they’ve already managed to raise $4.5 million of their $10 million goal.

For everything they have achieved, Michael and the Highway of Heroes team know there is still a long road ahead. But Michael takes it all in stride by keeping an eye to the legacy he is helping create. “Rome wasn’t built in day, and a forest wasn’t created with the first tree,” he says. “If we get two million trees in the ground, imagine what it will look like 40 years from now. People will drive along the 401 and say, ‘Wow, they did some good thinking back in 2019.’”

Toronto Foundation Fundholders can support this incredible cause by making a grant directly from their fund to the Ontario Horticultural Trades Foundation (please designate the grant to support the Highway of Heroes Tree Campaign). Visit Donor Central or contact David Fox at dfox@torontofoundation.ca.

Donations can also be made at www.hohtribute.ca/donate.

For more information on how you can get involved with the Highway of Heroes Tree Campaign, contact Michael de Pencier at mdep@keypublishers.com.

To create your own legacy, contact Aneil Gokhale at agokhale@torontofoundation.ca.