This is the 18th Toronto’s Vital Signs Report. Our most in depth and broadly cited report tracks 10 quality of life issue areas and amplifies the voices of sector leaders. Their insights and hopes for a better future informed our data analysis and the opportunities and obstacles to getting better.

The cross-cutting trends that have emerged or been amplified through the pandemic.

The pandemic has pushed inequality to an all-time high. Canadians’ net worth has grown by $1.8 trillion - the highest increase ever. But about 95% of growth has gone to homeowners, while many younger and racialized residents struggle with the rising cost of living.1 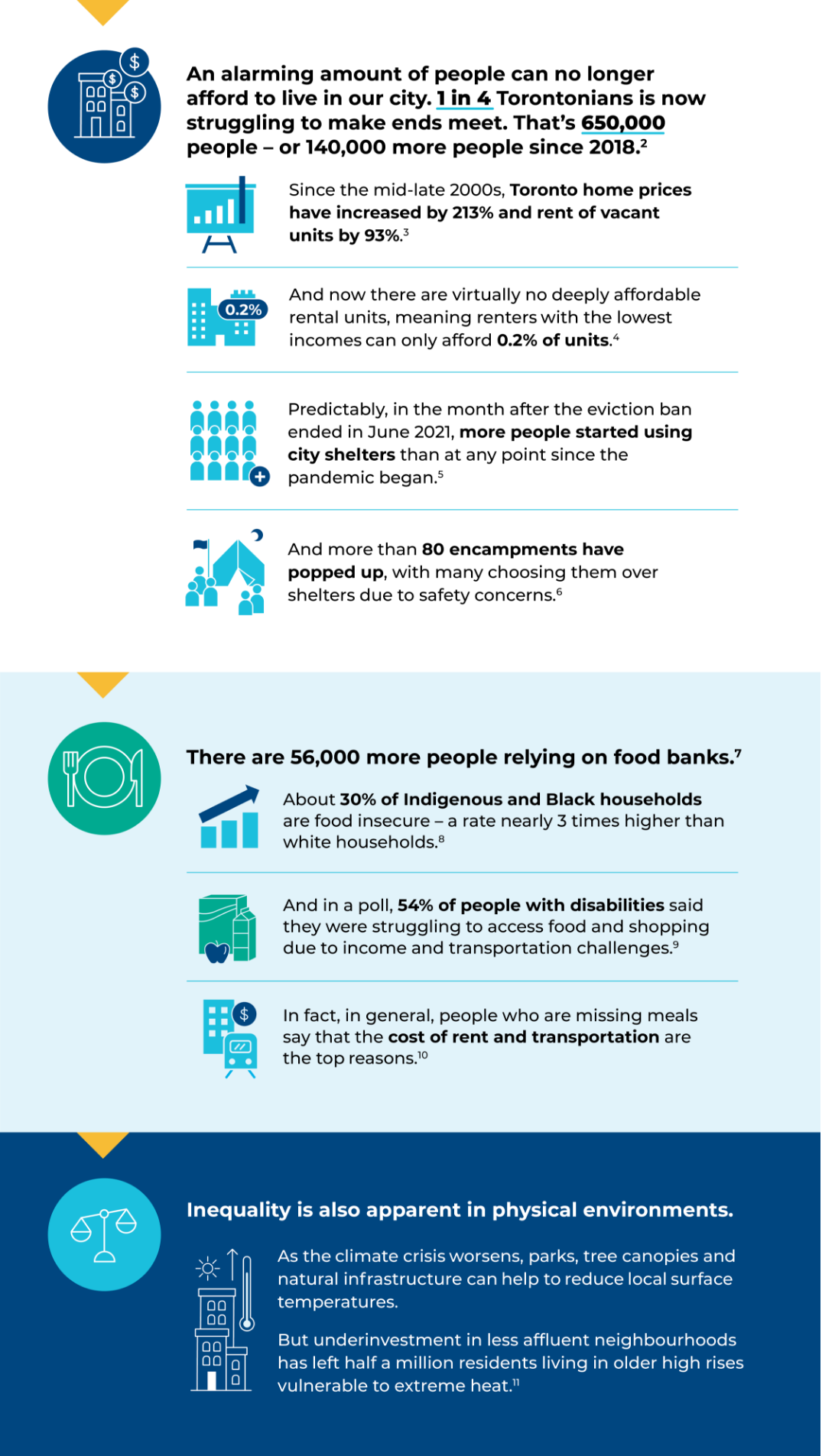 Technology brings the promise of access to opportunities and services. But the accelerated shift online has exposed an immense digital divide. Without equal access to the internet, technology and inclusive design, the online world is perpetuating obstacles for those who were already being marginalized by systemic barriers. 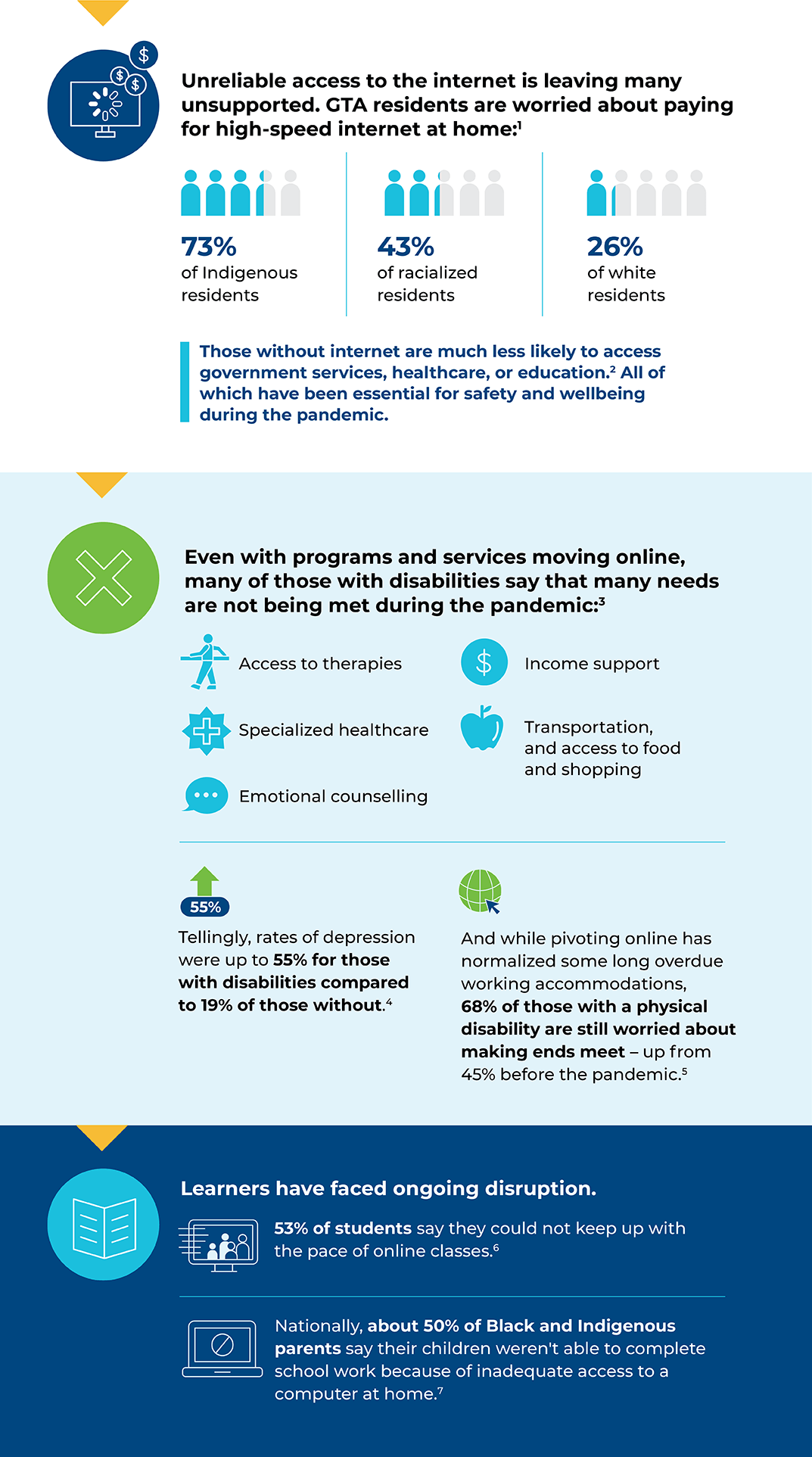 At the heart of Toronto's worsening inequality crisis are underemployment, and low-paying and precarious jobs that were hardest hit during COIVD. These trends can have lasting impacts on livelihoods. And while there's been a new appreciation for improving working conditions, rights and accommodations that have long been overlooked, change will only be realized with sustained advocacy.

Toronto is not well. Experts are warning of the long-term implications of the pandemic on our mental and physical wellbeing, and the far-reaching impacts into other aspects of our lives. Some will need more time than others to get better, and thus the momentum of recovery depends on ensuring adequate supports and services are available.

Community organizations are the unsung essential heroes of the pandemic. With a growing number of people who feel they have no one to rely on in times of need, nonprofits and grassroots groups have been a lifeline. But the pressure is taking a toll and will likely outlast the pandemic, which could impact the recovery of the tens of thousands of residents who rely on them. 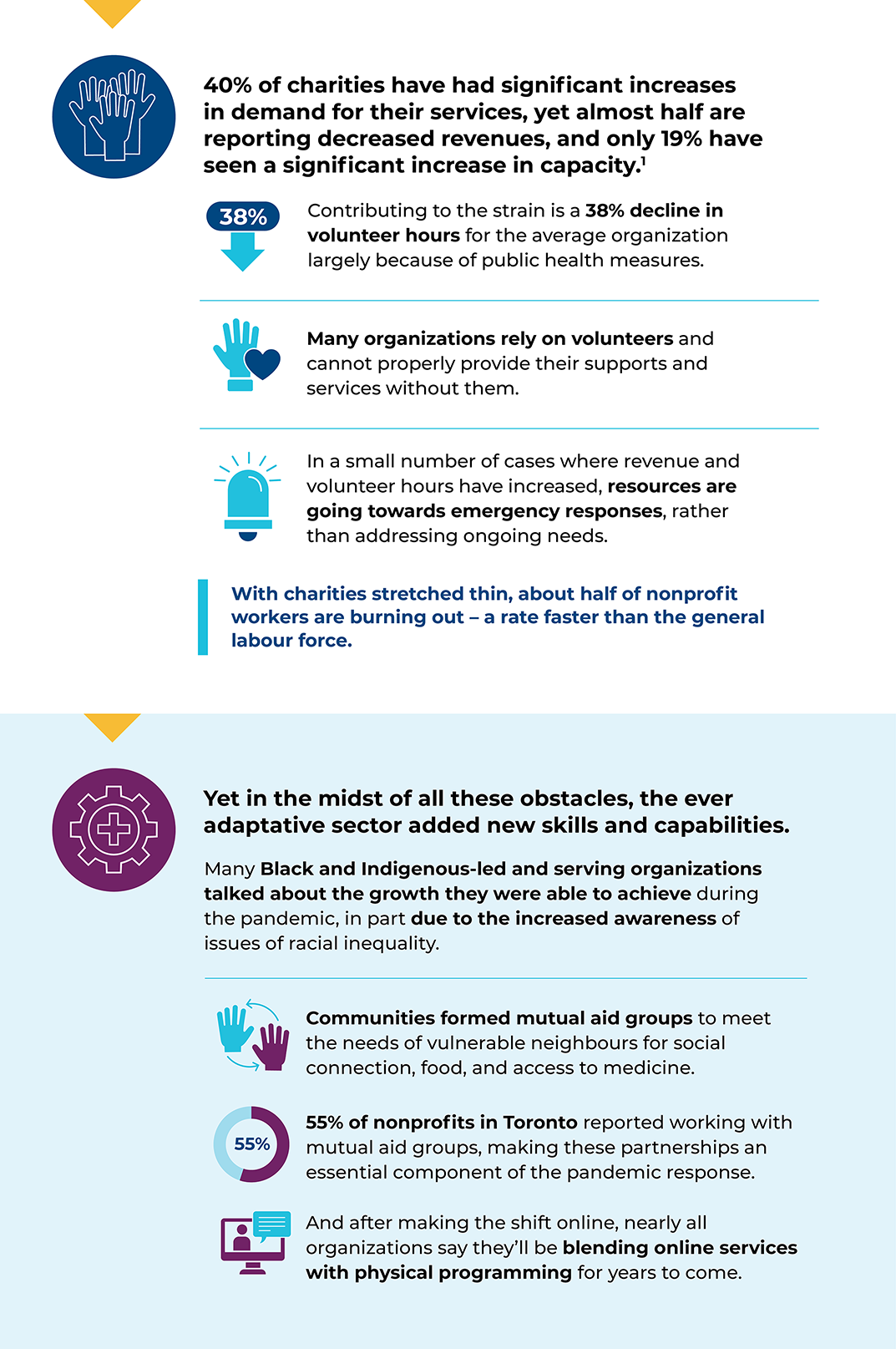 To contain the virus spread, Toronto has had more severe and prolonged lockdowns than nearly any major city in the world. The social and economic fallout of this has been more severe than in most Canadian cities. Particularly pronounced has been the role that social distancing has played in declining mental health, food insecurity, and the overall wellbeing of people with disabilities.

While we struggled with the public health crisis, numerous pre-existing health inequities were brought to the fore. The parts of the city with the highest poverty and the highest percentage of racialized people have long experienced much lower rates of life expectancy and higher rates of numerous diseases. In the pandemic, they were hit again, bearing the brunt of infections and deaths. Even as the city began to recover from the pandemic, the slow rollout of vaccines in the places that were most affected highlighted long-time systemic barriers, including an uneven distribution of the health infrastructure.

The unequal impacts of the pandemic underlined the racialization of poverty in Toronto. Low income workers who are more often racialized have not yet recovered their pre-pandemic working hours, and the situation is worse in Toronto than the rest of the country. And for those on social assistance and unable to work, there was no relief. On the other hand, the pandemic was only a blip on the income levels of wealthy and mostly white Canadians, who quickly recovered any lost hours and have seen the value of their stock portfolios and houses soar.

High-income workers were easily able to transition to work at home and continued to receive their full salaries, many low-income workers either lost their jobs or had their hours reduced, and in many cases had to continue working in unsafe environments.

Women have disproportionately suffered job losses (especially racialized women), often working in service sectors that have been subject to significant reductions during the pandemic and they have also assumed the majority of childcare responsibilities that have resulted from school closures due to uneven caregiving.

There has been some societal appreciation for “essential workers,” the usually low-paid workers who have kept the city running throughout the pandemic. However, despite calls for change, there has been little in the way of concrete policy changes or wage increases to fundamentally improve the lives of these workers.

Community-based organizations, both formal and informal, play a fundamental role in connecting us, and the strain on them has been severe and will likely outlast the pandemic. For most nonprofits and charities, donations and volunteering tanked and then rebounded to some extent, at least on the short-term revenue side, and staff burnout is high. But, the emergence of grassroots groups as essential components of the pandemic response is a positive turn of events. Communities came together in mutual support to ride out the pandemic and mitigate the damage.

Hope for a better future may be the most promising outcome of all. In the face of the unequal effects of the pandemic, the broad embrace of racial justice and the importance of Reconciliation have emerged as central issues that can guide us forward.

The pandemic experience in our city had an unequivocal impact on the environment, for good and for bad. As residents stayed home, air quality improved, and vehicle emissions decreased, but the volume of residential waste went up. As the weather got warmer, people emerged from lockdown and flocked outdoors, and many reported an increased appreciation of nature. But as past research has shown, the burden of many environmental risks often falls to those already vulnerable. Older, low-income, predominantly racialized residents experience higher deaths from heat waves, have lower access to green space and are also more prone to negative health outcomes arising from poor air quality. The past 18 months, which have so clearly laid bare the inequities upon which our city is built, need to be a wake-up call for how we talk about and urgently address the climate crisis.

The physical closure of schools and cancellation of before- and after-school programs together led to sharp increases in hunger for many students who had previously relied on nutritional supports. Parts of the city that are home to more low-income and racialized residents bore the brunt of learning disruptions. Students in those areas were more likely to quickly switch to virtual schooling, as these neighbourhoods had the most severe COVID-19 outbreaks, but students in these neighbourhoods were most likely to struggle with access to high-speed internet, high-quality devices and adequate space to focus on schoolwork.

Where it was possible, the shift to online kept organizations afloat, the livelihoods of some workers intact and the hearts and minds of residents engaged throughout the dark days of the pandemic.

While the pace of recovery is uncertain, the move online offers some organizations the opportunity for audience expansion. The historic dependence on face-to-face interaction has been an obstacle for many whose location and/or financial limitations have precluded them from participating in the past. The forced shift to virtual programming without a doubt offers immediate-term potential for greater access, and this will help address well-documented gaps, particularly for low-income and populations that are otherwise being marginalized.

While overall crime went down in 2021, some neighbourhoods experienced spikes in violent crime, and intimate partner violence reached alarming levels. The extreme hardships experienced by some are no doubt a factor here. There’s no starker example of this than in the record 529 deaths from opioid overdoses, an overlooked but contingent fact in the unfolding story of COVID-19.

History has shown that hate crimes often rear up when fear and mistrust dominate. The foundations of Toronto’s great diversity have certainly been rocked with hate-related complaints to police up 51% in 2020.

But it was the role of policing itself that took centre stage, and many believe this is a sign of necessary change to come.

Despite recent big announcements of major capital investments in transit, the Toronto Transit Commission (TTC) continues to be one of the transit systems with the lowest public funding in North America. Without additional subsidies, declines in ridership will likely necessitate fare hikes in order to offset losses. And this will mean the burden will fall to those least able to afford them, disproportionately, women, essential workers, racialized residents and low-income residents.

As transit has been hard hit, the rise in active transportation offers a ray of hope. People have taken up walking and cycling in droves. Yet, access to infrastructure has been unequal. At the same time, social distancing measures dramatically reduced mobility around the city, driving social connectivity online. Those with weak or no access to the internet suffered the consequences.

Amid the economic disruption of the pandemic, 11% of rental units were in arrears as of October 2020, and as eviction bans were lifted in June 2021, the threat of increased homelessness looms.

Adequate housing is a fundamental human right, and successful models of nonprofit and community housing exist, but they require significant scaling up. Housing is the single largest expense for most Canadians. The explosion of housing prices combined with stagnant incomes and low availability of affordable units point to serious concerns for rising housing precarity.